Islington Council can today announce that children, parents and teachers at Ambler Primary School and Canonbury Primary School will benefit from a package of measures to make their school entrances cleaner, greener, healthier and safer.

The council is committed to creating a more equal borough. To help make the school run greener and healthier, the council has so far introduced a total of 36 School Streets, covering 37 schools on residential streets, to help make it easier for children to walk, cycle and scoot to school – bringing environmental, health, and educational benefits.

Following a consultation with local people, the council will now be bringing exciting changes to the school gate at Ambler and Canonbury Primary Schools.

So that even more children, parents, guardians and teachers can benefit from a more pleasant atmosphere outside the school gate, with less traffic and air pollution, the council is committed to making improvements to schools on main roads, with Ambler and Canonbury Primary Schools being the first.

The exciting new measures, which will be introduced in the spring, will involve changes to Blackstock Road and Canonbury Road to make the school gate more attractive, and to make it easier to walk, cycle and scoot to and from school. These include:

While Islington’s other School Streets schemes involve temporarily closing streets outside schools to motor vehicle traffic at drop-off and pick-up times, this isn’t possible for schools on main roads, as these roads are key to the local transport system. It’s expected that the introduction of the proposed package of measures outside the two schools will create cleaner, greener, healthier streets.

Cllr Rowena Champion, Islington Council’s Executive Member for Environment and Transport, said: “We’re determined to make Islington a cleaner, greener, healthier place to live for everyone, where all can travel safely and easily and where the toxic effects of air pollution are reduced.

“Our popular School Streets programme is key to achieving that and, by supporting children, parents, carers and teachers to walk, cycle, and scoot to school, they help local people to make greener choices about how they travel.

“It’s really important that children at schools on main roads are given the opportunity to travel to and from school in healthier and safer ways. The changes we’re making outside Ambler and Canonbury Primary Schools will help to achieve that, and we look forward to introducing similar measures outside other primary schools on main roads across Islington.”

Further information on the plans for Ambler and Canonbury Primary Schools can be found on the council's website. 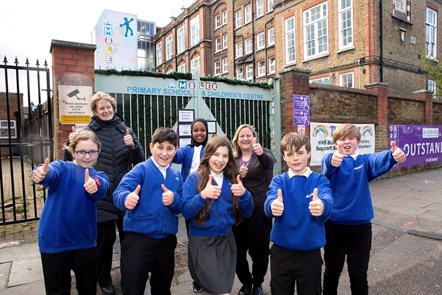 Children at Ambler Primary School celebrate the upcoming arrival of measures to make the school gate cleaner, greener and healthier 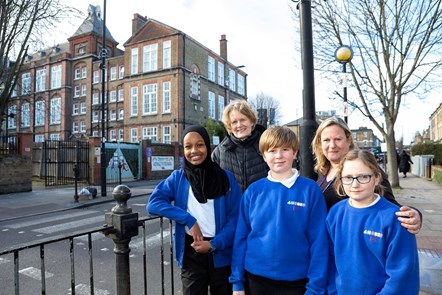