World-first scheme is launched using waste heat from the Tube to warm homes, two leisure centres and a school in Islington

Waste heat from the London Underground network is now capable of providing heating and hot water to more than 1,350 homes, a school and two leisure centres in Islington thanks to a pioneering energy centre that opened today.

The revolutionary Bunhill 2 Energy Centre – the first of its kind in the world – provides a blueprint for decarbonising heat in potential future schemes in London and around the world, reducing heating bills and carbon emissions while improving air quality and making cities more self-sufficient in energy.

The new energy centre uses state-of-the-art technology on the site of a disused Underground station that commuters have not seen for almost 100 years. The remains of the station, once known as City Road, have been transformed to house a huge underground fan which extracts warm air from the Northern line tunnels below. The warm air is used to heat water that is then pumped to buildings in the neighbourhood through a new 1.5km network of underground pipes.

The energy centre and new pipework adds a further 550 homes and a primary school to the existing Bunhill Heat and Power district heating network, launched in Islington in 2012. The network already provided cheaper, greener heat every day of the year to two local leisure centres and more than 800 homes, but the new energy centre gives the system the potential to supply up to 2,200 homes.

The centre’s combined heat and power technology means it also generates cheaper, greener electricity that is fed into the London Underground network and an adjacent tower block, powering its communal lighting and lifts.

In addition, the two-metre fan, installed in an existing six-storey London Underground mid-tunnel ventilation shaft, can also be reversed to help with cooling the Tube tunnels in the summer months.

Today London’s Deputy Mayor for Environment and Energy, Shirley Rodrigues, visited the centre to see the technology for herself and learn how it provides a blueprint for other sites on the Tube network, and for similar schemes that could use waste heat from other local sources, benefitting tens of thousands more Londoners.

The Mayor of London, Sadiq Khan, said: “It’s great to see this highly innovative project up and running, recycling waste heat from the Tube to provide a low-carbon, affordable way of heating local homes and businesses. I’ve set London the target of being carbon-neutral by 2030. It’s an ambition that will require innovative projects like Bunhill to help deliver it. If we’re truly going to tackle the climate emergency we will need progressive partnerships between local authorities, City Hall, TfL and others as was demonstrated so perfectly by this project.”

Cllr Rowena Champion, Islington Council’s Executive Member for Environment and Transport, said: “This pioneering project recycles heat that was simply being lost to the environment. We are cutting carbon emissions in a way that also reduces people’s energy bills, helping us to help them at a time when the cost of living is soaring.

“Not only is this contributing to Islington’s commitment to be a net zero carbon borough by 2030, but this initiative also helps to reduce fuel poverty and make Islington a fairer place, while offering our communities a sustainable, cheaper and greener future.

“I’m very proud of this exciting project, which promises to make a real difference to residents and the environment.”

Andy Lord, London Underground’s Managing Director, said:  “Capturing waste heat from Tube tunnels and using it to supply heating and hot water to thousands of local homes hasn’t been done anywhere in the world before so this ground-breaking partnership with Islington Council is a really important step. Heat from the London Underground has the potential to be a significant low-carbon energy source and we are carrying out further research, as part of our energy and carbon strategy, to identify opportunities for similar projects across the Tube network.”

During the winter months, a fan in the ventilation shaft extracts warm air from the Tube which travels over a series of water-filled pipes, heating the water inside by a few degrees. The water temperature is then increased to about 80c using heat pumps, which is suitable for domestic and commercial central heating systems. The fan also has the potential to operate in reverse to supply cooler air to the Tube tunnels during the summer months.

The hot water is pumped around a network of insulated underground pipes, and the heat is again transferred to communal heating system loops on housing estates using heat exchangers.

The heating bills for council tenants connected to the network will be cut by 10 per cent compared to other communal heating systems, which themselves cost around half as much as standalone systems heating individual homes. The nearby Moreland Primary School is the first school to be connected to the network, which already serves the pool and facilities at Ironmonger Row Baths and Finsbury Leisure Centre.

The district heating network is greener too because it reuses heat that would otherwise be wasted; those who are connected will be helping to reduce CO2 emissions by around 500 tonnes each year.

A new public artwork by celebrated Scottish artist Toby Paterson also graces the energy centre. Sited at ground level and wrapped around the building, the series of cast aluminium reliefs draws a link between the centre and the community it serves, and was commissioned by Islington Council.

The pioneering extension to the Bunhill Heat and Power district heating network is a collaboration between Islington Council, Transport for London and the Mayor of London. It was funded by Islington Council, which owns and runs the network, and a grant from the European Union’s CELSIUS project.

+ Moreland Primary School pupils star in an eye-catching video explaining how the new technology works – it can be seen here.

+ A further video providing more detail on the project can be found here.

+ The existing Bunhill district heating network already heats more than 800 homes and two leisure centres in south Islington. The new centre hooked up another 550 homes and a primary school, serving a total of 1,350 homes. The network now has the potential to supply up to 2,200 homes.

+ Most of the heat in the London Underground is generated by Tube trains’ electric motors and brakes, with a small additional amount from station equipment and customers.

+ City Road station was opened in 1901 between Angel and Old Street Tube stations. It was closed in 1922 due to low customer numbers, and was mostly demolished in the 1960s, leaving only the structure around the original lift shaft at street level. Since then it has been used by London Underground as a mid-tunnel ventilation shaft and emergency exit for the Northern line.

+ The waste heat from London Underground’s ventilation shafts has the potential to be utilised to heat nearby buildings. TfL has undertaken a study on 56 ventilation shafts to assess the potential of each for exporting waste heat. Detailed technical feasibility studies have been completed for the top six sites and TfL is developing its strategy to move these sites forward. Key findings are expected to be shared later this year.

+ The Bunhill phase 2 project is an outstanding example of collaborative working between Islington Council’s Energy Services Team and a wide range of partners and contractors. Islington Council would like to thank the
following partners for their invaluable input in this world-first project:

+ The CELSIUS Project: A European Union-funded project that provided funding for the new energy centre and heat network expansion as part of a wider project exploring low carbon innovation in heat networks in several European cities, including Cologne, Genoa, Gothenburg and Rotterdam. Based on the premise that cities and districts are in a position to take the lead in the energy transition, the European Project CELSIUS, funded under the 7th Framework Programme, assembled a network of 72 cities and 68 City Supporters between 2014 and 2017. They joined the project partners (20 organisations from public, private and research institutions) to help cities plan, develop and optimise their district heating and cooling networks. The project had five city-based demonstrators and the Bunhill Heat and Power Network was the London demonstrator. For more information visit https://celsiuscity.eu

+ Transport for London – As a key partner in the Bunhill 2 scheme, TfL upgraded its City Road mid-tunnel ventilation system to enable the capture and utilisation of waste heat from the Northern line tunnels to provide hot water to local homes and businesses. TfL is also carrying out further research to identify opportunities for similar projects across the Tube network as part of its Energy and Carbon Strategy.

+ The Mayor of London – Brought together Islington Council and TfL to form the partnership that has delivered the Energy Centre for the Bunhill phase 2 project. City Hall also funded the early feasibility work for the project and co-ordinated London’s overall involvement in the Celsius project.

+ Cullinan Studios – Provided the architectural concept design for the new Energy Centre; consulting extensively with the local community, Planners and local Councillors to secure Planning Permission. McGurk Architects were then appointed to take the design through to completion.

+ Ramboll – Carried out feasibility studies to confirm that the heat pump concept was financially and technically viable and acted as Client Engineer developing the design of the system, and worked as Islington’s Contract Administrator.

+ Gleeds – Acted as Cost Manager during the project, valuing the amount of work carried out under the contract.

+ London South Bank University – Analysing the real life performance of the scheme, evaluating its benefits and identifying how best it can be applied. This will help operators optimise the efficiency of the heat generation plant and better understand its impacts on London and worldwide.

+ Topic Plan – provided Testing and Commissioning assurance for the project.

+ AECOM – Provided support and advice to Islington Council on the Construction Design and Management (CDM) Regulations to ensure suitable Health and Safety management arrangements were in place during construction. AECOM also provided support to Colloide in discharging their duty under these regulations as Principal Contractor and Principal Designer.

+ Toby Paterson – Created artwork panels for the face of the new Energy Centre representing a quiet celebration of the often overlooked and occasionally undervalued everyday infrastructure that defines so many Londoners’ lives. 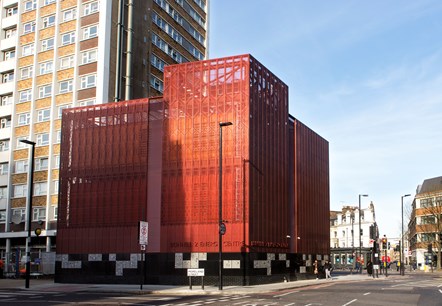 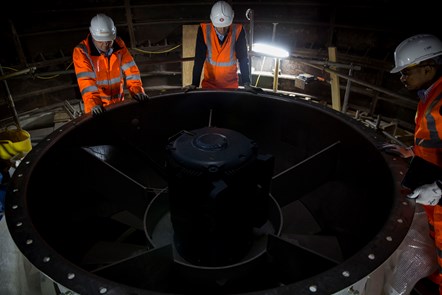 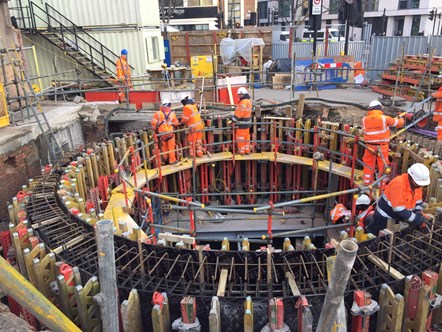 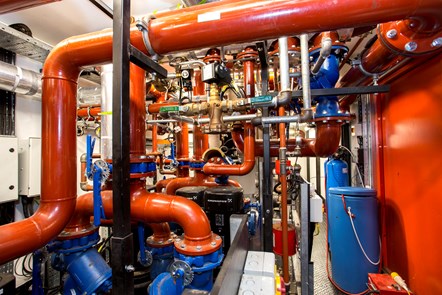 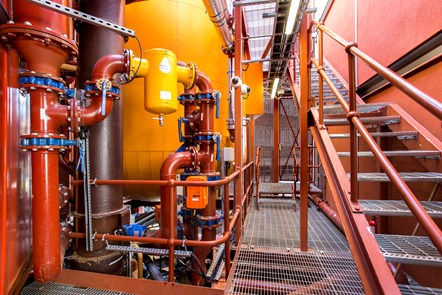 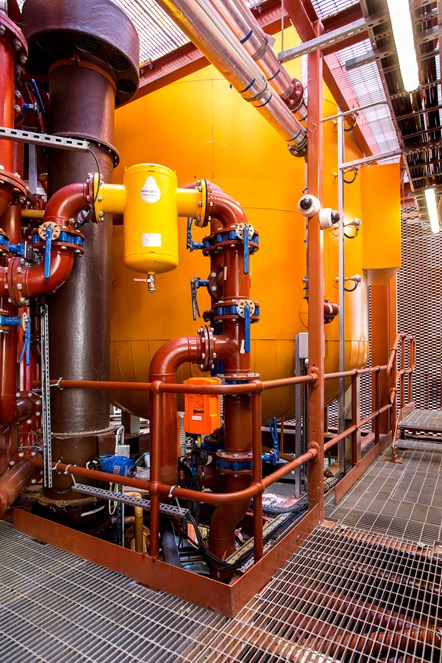