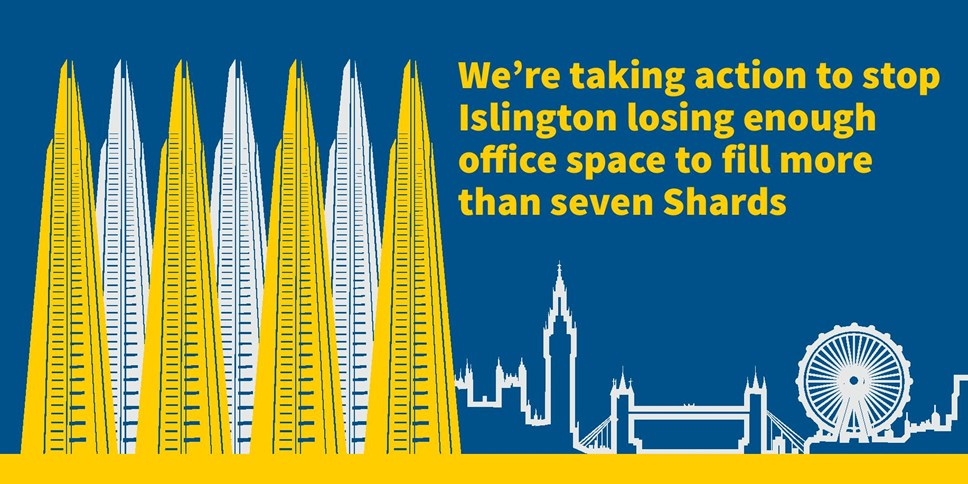 Jobs and Money Environment and Place

Islington Council has taken action to safeguard around 900,000 sq m of vital office space – more than seven times the entire floorspace in The Shard – which could otherwise be lost to developers and turned into expensive homes.

The office space is spread across thousands of premises in the south of the borough, closest to central London, which together supports around 62,000 jobs, or more than one for every seat at the Emirates Stadium. It is part of a special area of national importance called the Central Activities Zone (CAZ), the commercial core of London’s economy.

Due to its economic importance, office space in the CAZ has been protected from landlords wanting to convert it into luxury residences by a requirement to obtain planning permission from the council first, which they would be unlikely to get.

Since 2013, owners of office buildings in some other parts of Islington and across the country have been allowed to convert them to residential accommodation without seeking council consent – exercising what is known as a permitted development right (PDR). Offices within the CAZ have been exempt from this until now, but the Government will lift the exemption in May, leaving landlords free to convert some of the country’s most economically valuable office space into expensive homes at will.

In response, the council yesterday (Thursday, 17 Jan) agreed to use its legal powers to keep office space inside Islington’s portion of the CAZ protected, safeguarding a significant chunk of London’s economic engine and tens of thousands of jobs from the threat of being lost.

Cllr Asima Shaikh, executive member for inclusive economy and jobs, said: “This might seem like a small legal change but the sheer scale of the threat this poses to the London and national economy – not to mention local jobs and businesses – is incredible. Islington’s share of office space in the CAZ would fill more than seven Shards on its own.

“We’ve already seen the huge impact that the permitted development right has had elsewhere in Islington since 2013, with landlords converting more than six football pitches’ worth of office space into residential, capable of supporting around 3,000 jobs – and with absolutely no affordable housing provided.

“Many small and medium-sized businesses and charities have been turfed out, jobs have been lost and the local economy has suffered as a result. That is utterly wrong and we cannot let this happen here, where 70 per cent of the borough’s jobs and almost half of Islington’s businesses are located. Our proactive decision shows that we will do everything we can to protect people’s jobs and the office space they rely on.”

When the permitted development right (PDR) was introduced in May 2013 in the rest of Islington outside of the Central Activities Zone (CAZ), it quickly led to a large loss of office space – often more affordable workspace occupied by smaller businesses and charities.

Islington Council estimates that between May 2013 and December 2018, approximately 34,000sq m of office space was converted to residential under PDR. A further 8,500sq m is under construction, and landlords have notified us of their intention to convert a further 2,000sq m. The total so far equates to more than six full-size football pitches. Approximately half of the space already converted was occupied by businesses and organisations, meaning they had to move out. No affordable housing of any kind has been provided.

Significant office buildings in Islington that have been converted to residential under PDR since 2013 include Archway Tower, which was converted into 118 flats for private sale, and Whittington House, a fully-occupied office building on Holloway Road that was developed into 39 flats. Because of PDR no affordable housing was provided as part of either scheme.

On Thursday, 17 January, the council’s Executive approved the use of an Article 4 Direction in the CAZ to withdraw PDR for anyone wanting to change the use of a building from office to residential. This means they will still need to obtain council permission for any proposed conversion of office space to residential.

At approximately 900,000 sq m, the total office floorspace at risk within Islington’s portion of the CAZ would fill The Shard 7.24 times (The approved plans for The Shard state its total floorspace is 124,242sq m).