01 Mar 2019
Standing with our communities

Islington Council has become one of the first councils in the UK to officially adopt the All-Party Parliamentary Group (APPG) on British Muslims definition of Islamophobia.

Islington Council has become one of the first councils in the UK to adopt officially the All-Party Parliamentary Group (APPG) on British Muslims definition of Islamophobia.

The decision was announced at yesterday's Full Council meeting by Islington Council leader, Cllr Richard Watts. Other councils who have so far adopted the definition include Newham, Redbridge and Oxford.

The All-Party Parliamentary Group (APPG) on British Muslims definition of Islamophobia is outlined in their report, Islamophobia Defined, and is as follows:

"Islamophobia is rooted in racism and is a type of racism that targets expressions of Muslimness or perceived Muslimness."

The report highlights the profound negative impacts Islamophobia has had and continues to have on the British Muslim community, those who are perceived to be Muslim, and the British public in general. The report notes that Islamophobia is fostered by falsehoods and misrepresentation which result in discriminatory outlooks that have a detrimental effect on social harmony and inclusion.

The APPG definition has cross-party support and intellectual endorsement from over 70 academics in the field, as well as community support from hundreds of Muslim organisations across the UK.

“There is no place for hate in Islington. We are proud to be a welcoming, inclusive borough that celebrates diversity and champions inclusion.”

“The act of defining a thing helps us to understand it. In the case of Islamophobia, we hope that this working definition will allow us to use the word as a more effective tool to challenge bigotry, hatred and discrimination in our community, and to understand some of the challenges faced by Muslims in our society.”

“We welcome the APPG on British Muslims report on Islamophobia and are proud to adopt their working definition.”

“Richard has been a true ally in the fight against Islamophobia. We are therefore delighted that the Council has shown leadership in recognising the importance of adopting this definition of Islamophobia which has such widespread support within Muslim communities.” 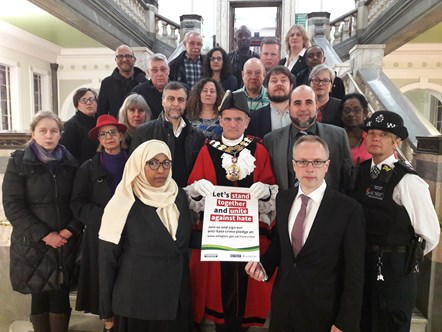