Islington Remembers: Small ceremonies to go ahead on Remembrance Sunday

Islington Council will mark Remembrance Sunday with a series of small socially distanced ceremonies to commemorate those who lost their lives in two world wars and more than 70 other conflicts.

Due to the ongoing coronavirus pandemic, the annual Remembrance Sunday parade will not take place this year. Instead, there will be small socially distanced services at Islington Memorial Green, Spa Green and Manor Gardens War Memorials, all taking place at 11am on Remembrance Sunday.  With no more than six attendees at each event, they will be attended by small groups of veterans and representatives who will pay respects on behalf of the borough.  Everyone else who would normally attend is instead being encouraged to pay their respects at home this year, by observing the two minute silence.

Residents who would like to lay a wreath or other tribute at the borough’s three war memorials are invited to do any time between the Remembrance Sunday services and Wednesday 11th of November.

Islington Town Hall will also be lit in red from Remembrance Sunday through to the evening of 11th November to commemorate those who lost their lives in two world wars and more than 70 other conflicts.

“With a heavy heart we have had to limit attendees at this year’s Remembrance Sunday services in order to protect the health of everyone in the borough but especially the vulnerable in our community, including our older veterans. They have fought for our country and we must all do our part to protect them now.

“However, we can all come together as a community and as a nation through the national two minute silence, where we pay tribute to those servicemen and women who have given so much, as well as all of those who have been affected by armed conflict. As one community we stand together to say: we remember.”

“It is important that the day is marked and those who gave the ultimate sacrifice are remembered. It is sad that the borough and its veterans cannot take part as they normally do, but they can join us online and take their own act of remembrance wherever they are.

"The IVA will have a small representation at the three reduced memorials to ensure the veteran community is represented by the borough on the 8th."

Residents are also invited to contribute to the Poppy Appeal, especially those who would ordinarily buy a poppy when they are out and about. Donations can be made through the Poppy Appeal website or by texting: to donate £2 text POPPY2 to 70545, to donate £5 text POPPY5 to 70545 or to donate £10 text POPPY10 to 70545.

The ceremony at Islington Green will be filmed and we hope to be able to share the film on our website as soon as possible after the ceremony has finished. 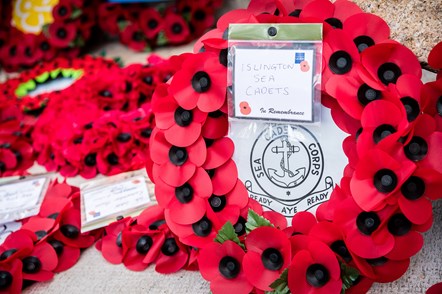