Islington Council is inviting local people to have their say on the Amwell people-friendly streets neighbourhood, with new monitoring data reflecting the positive impact of the scheme so far.

The scheme in Amwell is one of seven people-friendly streets neighbourhoods to be introduced by the council as 18-month trials, to help create the cleaner, greener, healthier Islington that local people have long been calling for.

By preventing cut-through traffic within the neighbourhoods, the trials help make streets where it’s easier to walk, cycle, scoot and use buggies and wheelchairs.

The Amwell people-friendly streets neighbourhood was introduced in November 2020, and monitoring data published today (Wednesday, 15 December) shows the benefits it has brought in its first 12 months.

All seven of Islington’s people-friendly streets neighbourhoods are subject to public consultations after around 12 months, to help decide if they should remain in place, be changed, or be removed.

The Amwell trial’s consultation is currently open, and will close on Monday, 31 January 2022. Further information on the consultation, and consultation events, can be found on the council’s people-friendly streets webpage.

“The monitoring reports that we have issued so far reflect the positive impact of the schemes in their first 12 months in reducing traffic within the neighbourhoods, creating streets that are more pleasant and enjoyable for local people. The Amwell neighbourhood has brought similar benefits, making it easier to walk, cycle, and use buggies and wheelchairs.

“Feedback from local people on all of the schemes is really important to us, and we’re looking forward to hearing from people living in and around the Amwell neighbourhood on their experience of the trial so far.”

The report, which has been published in full on the council’s website, also reveals:

It is likely that the monitoring results will have been impacted by a bollard being taken without the council’s permission at the northern filter of Lloyd Square.

To account for the significant impact of the Covid-19 pandemic on transport in London, traffic figures in the monitoring report have been adjusted through a process known as “normalisation”. Further details on this process can be found in the report itself.

Please note: traffic flows fluctuate on a daily basis (generally up to 10%). As such, changes of traffic volumes within -10% to 10% are considered insignificant (i.e. no or negligible change).

On boundary roads, traffic increased negligibly by 5% across three sites. There has been a 30% increase in motorised traffic on Farringdon Road, a negligible increase (3%) in traffic on Pentonville Road and a negligible decrease (-5%) on Rosebery Avenue. Two boundary road sites were affected by emergency utilities works during traffic surveys. 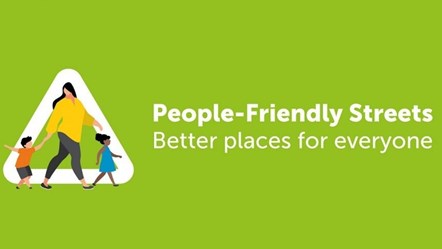 Graphic - People-Friendly Streets, Better places for everyone - with image of a woman and two children walking