16 Mar 2020
Standing with our communities

Islington's unsung heroes, volunteers and community champions have been recognised for their hard work with an evening of celebrations at Islington Assembly Hall. Residents and family members of winners joined councillors last night to celebrate the Mayor's Civic Awards and Ben Kinsella Award recipients.

The winner of the Ben Kinsella Award 2020 is Lily Tunbridge, an active volunteer at the Zone Youth Project.  She mentors and helps manage and train other young people to run the centre’s Youth Café.  She also organised youth club members to donate non-perishable food, treats and toiletries to the homeless in time for Christmas.  The Ben Kinsella Award is presented to an outstanding young person each year in memory of Ben Kinsella, who was murdered in 2008.

Miriam Ashwell – Chair of the Friends of Caledonian Park and a volunteer clock tower guide, she is involved in a number of initiatives to improve the park for the whole community. These include planting projects, the Cally Festival, Apple Day, creating an outdoor amphitheatre space and raising funds for an outdoor gym and table tennis table.

Jean and Richard Bull – stalwarts of the community and the Barnsbury Housing Association for over 45 years, they have organised camping trips, firework displays, children’s groups, youth clubs as well as trips for older people to the seaside and outlet shopping centres, along with the annual fun day for residents and their families. Jean also worked as Finance Manager and Richard as caretaker at the BHA.

Robert Burbidge - lead volunteer of the Finsbury Park Community Hub/Andover Community Centre for over 20 years, his quiet and proactive support has proved vital to the smooth running of the centre, enabling projects from the weekly free community meal, through food re-cycling, health and well-being programmes and a variety of support and welfare events.  Without his assistance the centre would be much more limited in its ability to deliver some of the essential services that the centre supplies to Finsbury Park residents.

Eula Nelson – member of the Friends of Paradise Park and volunteer at the Martin Luther King Adventure Playground and St David’s Church, she is recognised as one of those rare people who simply gets on and does things for other people without ever wanting something back or even wanting people to know she has done it

Sandi Phillips -  Chair of the Elthorne Pride Partnership Board, she has planned, organised and delivered numerous resident events including: weekly arts and crafts for over 55’s, bingo sessions, school holiday clubs for children of lone parents, the annual Summer BBQ, International Big Lunch and a Festive Hamper Drop to help tackle loneliness and to ensure that senior residents are remembered.

Helen Schofield – with a professional background in social and community work, she volunteers with the Canal & River Trust, has also been instrumental in supporting the re-greening of the Union Square garden and along with friends and neighbours set up a charity to fund a project for local, disadvantaged 9 – 11 year old children over five weeks of the summer holidays.

In addition, the life and work of Alice Kilroy, who sadly passed away on 17 February 2020, after suffering a period of ill-health, was recognised for her lifelong activity and commitment to a variety of causes which support and help Islington people. A school teacher for many years, Alice was also an active union member and campaigned for a better state education system for children. She was treasurer of Defend the Whittington Hospital Coalition, and campaigned to save the Whittington Hospital Accident and Emergency department from closure. Alice was a campaigner on local and national issues, sticking up for the disadvantaged in her community and further afield on: housing, anti-austerity, employment and trade union rights, the environment and in opposition to the Universal Credit benefits system.  She was also an active member of the Stop the War Coalition. Her award was collected by her daughter Stephanie Sutherland.

Mayor of Islington, Cllr Rakhia Ismail said: "The awards represent a fantastic opportunity to showcase the very best of Islington, those people from all walks of life, young and old who go the extra mile and dedicate their time to making Islington a great place to live, and who inspire us all."

André Langlois, editor of the Islington Gazette, which sponsors the awards, said: "As someone who has worked at a few different newspapers, and who is newly-arrived in Islington, it is great to hear such heartwarming stories about community-minded people.

"It is all very well saying that somewhere has great 'community spirit' but it is those individuals dedicating their time to important causes who make that true.

"Reading of their work behind the scenes reminds me how much there is to celebrate in the borough, and I hope that we at the Gazette can help to do that." 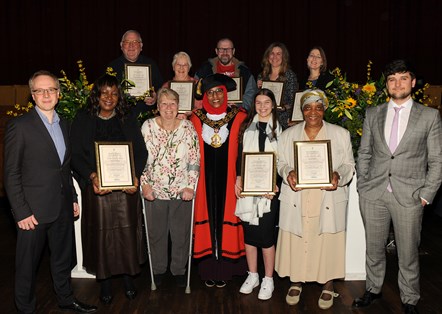