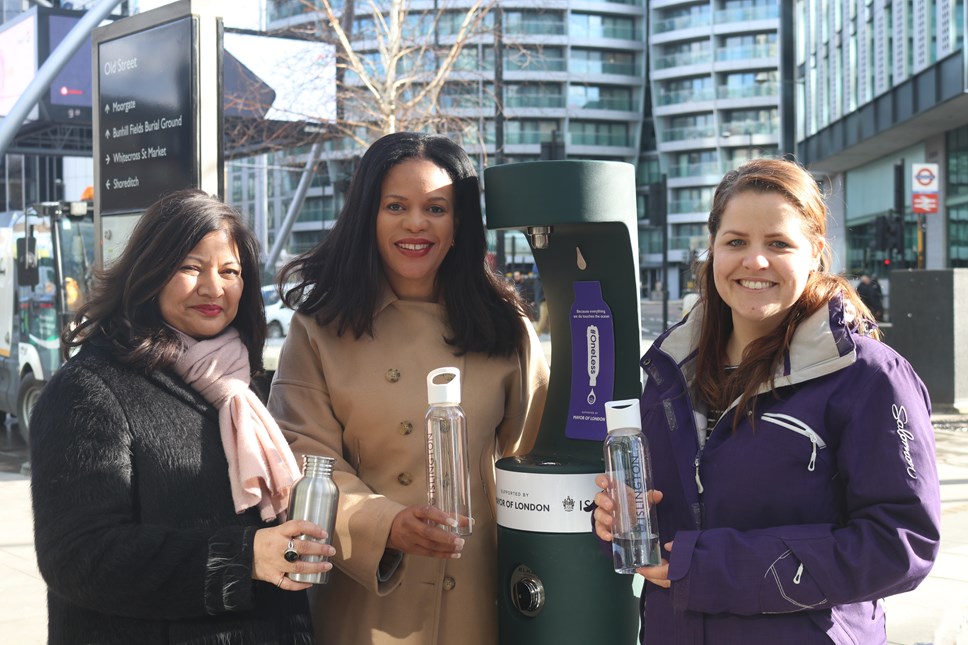 A new drinking fountain at a busy spot near Old Street Station – the first on the public highway in Islington – is offering passers-by free water refills to help cut plastic waste.

It is the first of six new drinking fountains for Islington as part of the Mayor of London's Drinking Fountain Fund, run with #OneLess, in partnership with Islington Council.

The fountain stands on the Promenade of Light close to Old Street Roundabout, conveniently located for the thousands of workers, visitors and local residents who walk nearby each day.  It was launched today (11 February), with volunteers offering free refillable water bottles to passers-by.

The new fountains are part of Islington Council’s commitment and ongoing work to cut the use of single-use plastic in the borough.  Globally, it is estimated that 8 million tonnes of plastic ends up in the ocean every year, where it harms animals, damages the environment, and enters the human food chain.

Cllr Claudia Webbe, Islington Council’s executive member for environment and transport, said: “Drinking fountains are win-win – they help people cut down on plastic waste, and also help people to get free water - a healthy alternative to sugary drinks - when they are out and about.

“We’re determined to take action to help cut single-use plastics, which are so harmful for our environment.  This new drinking fountain, in this busy location at the heart of Old Street, is our first on the public highway, and will serve thousands of local residents, workers and visitors to our city, and help to cut plastic waste.”

“It is the first of six new fountains for Islington thanks to funding from the Mayor of London. Islington’s six new water fountains are a vital part of our ongoing commitment and work to reducing plastic waste, especially single-use plastic.”

Islington Council successfully bid for money from the London Drinking Fountain Fund to pay for the drinking fountains, and all the locations were assessed by the #OneLess campaign, led by Zoological Society of London (ZSL), on accessibility, visibility and access to water – making water refills available for as many Londoners as possible.

Fiona Llewellyn, Project Manager of the #OneLess campaign and Senior Project Manager of Marine and Freshwater Conservation at ZSL (Zoological Society of London) said: “This new public fountain will make it easier for Londoners to keep hydrated on the go without using single-use plastic water bottles - one of the most prominent items of plastic litter in both the River Thames and coastlines around the UK.

“We are delighted to be working with the London Borough of Islington on this exciting initiative to reduce the plastic blight on the ocean and firmly establish London as a city that no longer uses plastic bottled water.”

The London Drinking Fountain Fund was established in 2018 by the Mayor of London, MIW Water Cooler Experts, and #OneLess - a campaign led by the Zoological Society of London, to reduce single-use plastic water bottles in the capital and tackle ocean plastic pollution. This fountain was donated by this fund, and the council paid for installation and water connection.

City Hall, Deputy Mayor for Environment and Energy, Shirley Rodrigues said: “Water fountains are a simple but effective way to encourage Londoners and visitors to switch from plastic bottles to reusable ones. Demand is greater than ever for quick and easy ways of accessing free drinking water and I’m pleased see these fountains now appearing in public spaces across London. They’re already proving popular and City Hall is working on plans to install many more to benefit both thirsty Londoners and the environment.”

As well as using public drinking fountains, you can find local cafes, restaurants and other places to refill your water bottle by using the Refill app.

With capital from the London Drinking Fountain Fund, #OneLess and the Mayor of London are installing an initial pilot network of drinking fountains and bottle refill stations across London to make it easier for Londoners to refill on the go and ditch single-use plastic water bottles.

The Mayor of London

These fountains are the first steps in the Mayor’s plans to install drinking fountains across London, helping to reduce single-use plastic water bottles and offer free water and a healthy alternative to sugary drinks. The Mayor has now launched a new £5 million partnership with Thames Water to build a network of fountains by 2021. https://www.london.gov.uk/what-we-do/environment/waste-and-recycling/single-use-plastic-bottles

In addition, the Mayor is supporting Refill London which is where businesses and organisations offer free water refills to the public. These refill stations can be located by a sticker in the window or using an app. The campaign is run by City to Sea, a CIC based in Bristol.  Since the Mayor launched the scheme in March 2018, the number of refill stations went from 200 to 2200 across London.   https://refill.org.uk/

The #OneLess campaign has been leading the charge against ocean plastic pollution since 2016, focusing on the pervasive single-use plastic water bottle. #OneLess is leading a ‘refill revolution’ in London, transforming the capital into a place where single-use bottled water is a thing of the past and where plastic waste is drastically reduced for the sake of the ocean.

#OneLess is led by the Zoological Society of London, in partnership with Forum for the Future, The International Programme on the State of the Ocean, and the Thames Estuary Partnership and is working with major London attractions and businesses, as well as the Mayor of London, to find and implement solutions to eradicate plastic bottled water and enable a refill culture across our city. For more information visit www.onelessbottle.org.

ZSL (Zoological Society of London) is an international conservation charity working to create a world where wildlife thrives. From investigating the health threats facing animals to helping people and wildlife live alongside each other, ZSL is committed to bringing wildlife back from the brink of extinction. Our work is realised through our ground-breaking science, our field conservation around the world and engaging millions of people through our two zoos, ZSL London Zoo and ZSL Whipsnade Zoo. For more information, visit www.zsl.org 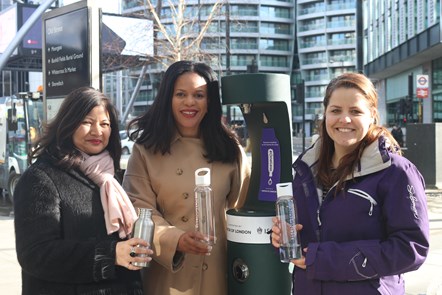 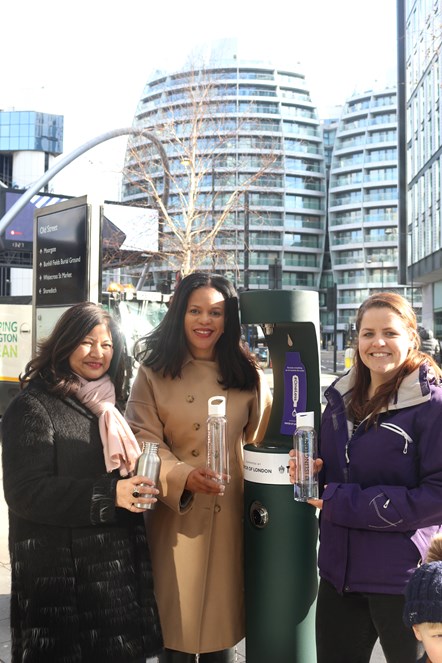 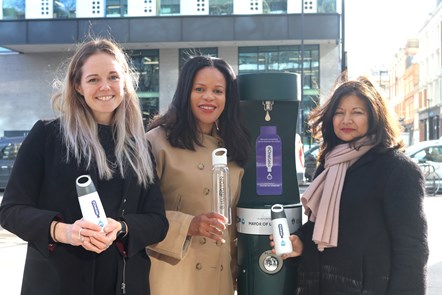