Earlier this year, Islington became the first council in the UK to collect and publish air quality data showing nitrogen dioxide (NO2) levels outside all the borough’s schools.

Today, Islington publishes its schools’ air quality data for 2019, the most recent year for which data is available. The annual Air Quality Report, released ahead of Clean Air Day on Thursday, shows an improvement outside most schools compared with the previous 12 months.

All parents expect to send their children to school in an environment which is safe and healthy, and the council is committed to rolling out its popular School Streets programme – which sees streets outside schools closed to traffic at drop-off and pick-up times during term time. So far, the council has put in a total of 29 School Streets, with a further 10 expected to be installed before the end of the year.

In addition, Islington Council is looking to create a safer, greener, healthier borough through the implementation of people-friendly streets. These have the effect of removing traffic that cuts through local streets, meaning cleaner air and better conditions for walking, cycling and using buggies and wheelchairs. So far, the council has announced five people-friendly streets neighbourhoods, and more will follow soon.

The newly-released air quality figures give cause for encouragement, but reflect the need for further work to clean the air that local people breathe.

These figures show how 51 of the 74 school monitoring sites had lower levels of NO2 in 2019 than they did in 2018. However, three schools still measured over the legal limit of 40 µg/m3.

As pollution can vary from year-to-year, for example due to changes in weather conditions or due to pollution from beyond London or the UK, it is important to compare a single year’s data to longer term trends. Islington will continue to monitor pollution outside schools and is determined to improve air quality at all schools, and across the borough, to ensure our children can have the best start in life.

The 2019 Air Quality Report also states that all of Islington’s urban background air quality monitoring sites – which monitor pollution in urban areas away from main roads - recorded levels of NO2 below the EU’s limits. Particulate matter levels were also found to be below the EU's limits in the one urban background and one roadside site where this is measured. NO2 and particulate matter are pollutants that are known to have negative health effects, especially for those with breathing difficulties.

Falling below the EU's limits will therefore mean that local people have cleaner air to breathe, reducing negative impacts for those with respiratory diseases, and helping to address climate change.

Meanwhile, for the second year running some, but not all, of the borough’s roadside monitoring sites – which measure air pollution levels on some of Islington’s roads – recorded NO2 levels below the EU’s limits. This suggests that air quality in the borough is improving, but that there is still further work to be done.

Cllr Rowena Champion, Islington Council’s Executive Member for Environment and Transport, said: “Air pollution is a major health emergency affecting people in our borough and across London, and in some cases is a life or death issue.

“Islington Council is taking major steps to address this including the declaration of a climate emergency and the setting of our ambitious goal to be a net zero carbon borough by 2030, both of which are complimented by a series of measures to improve air quality.

“Our Air Quality Report shows that air quality in the borough continued to improve last year, but that there is still more work to be done. High levels of pollution are still being recorded in some areas and even where levels of NO2 have dropped, further drops are still needed.”

In addition to the work to create School Streets and people-friendly streets all over Islington, the council has continued to install electric vehicle charging points with the aim of having 400 by the end of March 2022, moved forward with the electrification of some of its fleet vehicles, and has joined a new call for businesses to tackle the air pollution caused by idling engines.

More information on air quality monitoring in Islington can be found on the council's website, where you can also view the 2019 Air Quality Report in full. 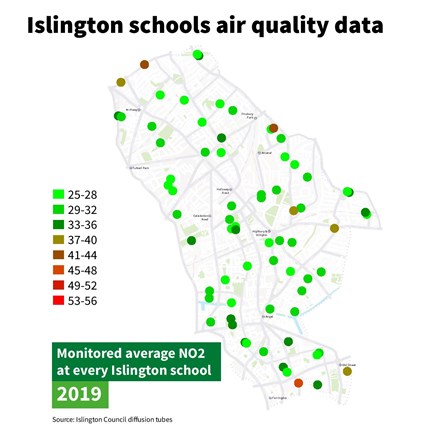