The Holloway Road to Pentonville Road Cycleway is set to remain in place following positive monitoring data and feedback, with improvements to be made to ensure it delivers even cleaner, greener, healthier streets that all can enjoy.

Passing through Liverpool Road, Tolpuddle Street, and Penton Street, the route, known as Cycleway 38 South, was installed in September 2020 as an 18-month trial to help make it easier to walk, cycle, and use buggies and wheelchairs in the borough.

To allow local people to have their say on its impact and whether they felt the trial should be kept, changed, or removed, the council held a public consultation on the cycle route between 18 November 2021 and 15 December 2021.

This consultation, which received 1,088 responses, revealed the positive impact of the scheme. A total of 54% of respondents agreed that the introduction of Cycleway 38 South had been a positive change (43% disagreed). 52% said that they felt it was easier to make trips by walking and cycling (25% disagreed) while 48% said the scheme had made it easier to access friends, family and school (25% disagreed).

However, a total of 34% of respondents said that it was less safe to walk, use a wheelchair or other mobility aid since Cycleway 38 South’s introduction (32% disagreed). Meanwhile, 47% said they would like the scheme to be changed (46% disagreed).

To help local people take part in the consultation, the council published a monitoring report on Cycleway 38 South’s impact during the first year of the trial. This revealed that cycle volumes on the route had increased by 33%, including a 96% rise on Tolpuddle Street. It also showed that the scheme had no impact on London Fire Brigade response times, or on crime and anti-social behaviour rates.

Having carefully reviewed monitoring data and feedback from local people, the council has decided to keep Cycleway 38 South in place, with a package of improvements being made to the scheme to ensure it delivers cleaner, greener, healthier and safer streets for everyone. These include, but are not limited to:

The council will monitor the impact of these improvements and, if necessary, will consider further changes. Further information can be found on the council’s website, and residents living close to Cycleway 38 South will also soon receive a leaflet regarding the changes to the scheme.

Cllr Rowena Champion, Islington Council’s Executive Member for Environment and Transport, said: “Cycleway 38 South plays an important role in our ambitions for a cleaner, greener, healthier Islington. By making it easier for local people to walk and cycle, the scheme is designed to reduce dependence on cars, reducing air pollution and road danger.

“We’re really pleased to hear that many people have enjoyed the positive benefits that the scheme has brought, and have therefore taken the decision to retain Cycleway 38 South.

“We’ve listened very carefully to feedback from all residents, and are introducing a package of measures to improve the scheme and ensure it works for everyone. We will continue to work with residents and businesses.”

Cycleway 38 South is a continuation of the Cycleway 38 North route, which runs from Finsbury Park to Highbury Fields. The two schemes provide protected space for people cycling, connecting residents across the borough and towards the City and the West End.

Cycleway 38 North was introduced permanently, after a public consultation in 2019 showed overwhelming support for it. 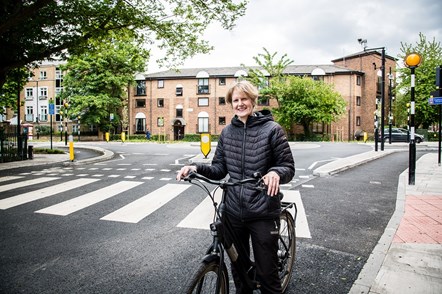 Cllr Champion on her bike on Cycleway 38 North